How to host a Swedish Midsummer Dinner

Last year we went of a break to Stockholm and instantly fell in love with the city and the country. One thing we learnt about on our trip was the Swedish traditions surrounding Midsummer.  On our return home we decided that it would be fun to have a go at a Swedish Midsummer party ourselves. We had our first attempt last year and we enjoyed it so much we did it again this year. This is how we created our perfect Swedish midsummer dinner:

Midsummer’s Eve is the traditional holiday to mark the start of the short Swedish summer season, involving getting back to nature and celebrating the countryside. It is one of the lightest nights of the year and was thought to be magical.  Although summer solstace falls on the 20th or 21st of June, the ever-organised Swedes celebrate on friday between 19th and 25th June. It is a public holiday and most take the opportunity to get our of the city and get back to nature.  Traditional activities involve creating and dancing around a maypole, collecting wild flowers and eating the first strawberries of the season. Traditionally unmarried girls would go out and collect seven varieties of wild flowers, it was said that if they slept with these under their pillows they’d dream of their future husbands.

A Swedish party needs Swedish food.  Not having developed a taste for the traditional pickled herring we opted to go for a meal of gravadlax followed but meatballs. Gravadlax is salmon, cured in salt and dill, we served this with a mustard and dill sauce and some rye bread. For the main course Calum made Scandinavian style meatballs from scratch and served with a potatoes salad, a beetroot salad and a cucumber salad. We had some lingonberry jam and a cream sauce gravy.

For desert Calum made a Strawberry Cream Cake. This is a midsummer classic that includes layers of sponge, strawberries and cream. We followed this recipe but there are plenty of variations to choose from. After the gorgeous cake we had a selection of nordic cheeses including Herrgardsost, Ädelost and Prästost severed with some Scandinavian style crisp breads.

A bit of researched suggested that Sweden is more of a beer drinking country than a wine one so we served up ice cold larger.  But after a bit more further research and talking to the good people at the Swedish grocery store we decided we needed some Aquavit.  We opted to go with a bottle of Lysholm Linie Aquavit (which we subsequently discovered was Norwegian, but we’ll gloss over that fact). This aquavit is fascinating, after the potato based spirit is distilled and flavoured with some herbs and spices it is placed in old sherry casts.  These casts are then loaded onto the back of a ship and go for a trip around the world, crossing the equator twice. Each bottle has a code on it so you can see where your bottle stopped off on the way.  To accompany our aquavit we tried our hand at some Swedish drinking songs, with limited success!

In Sweden they create garlands and raise a floral maypole (despite midsummer falling in June) whist we didn’t go full out and create our own maypole we did pay honour with filling old jars full of flowers. We got some Ammi visage from our local florist, it has very similar flowers to Cow Parsley and looked great with our blue and white scheme.  We got our plates, glasses, lanterns and napkin (repurposed tea towels) from Ikea, and found some vintage cutlery and a lace table runner to complete the scheme.

We loved hosting these dinners and we had a great time both this year and last. We now think this Swedish midsummer tradition will become one we keep up in the years to come. Do you think of this summer celebration, let us know your thoughts in then comments. 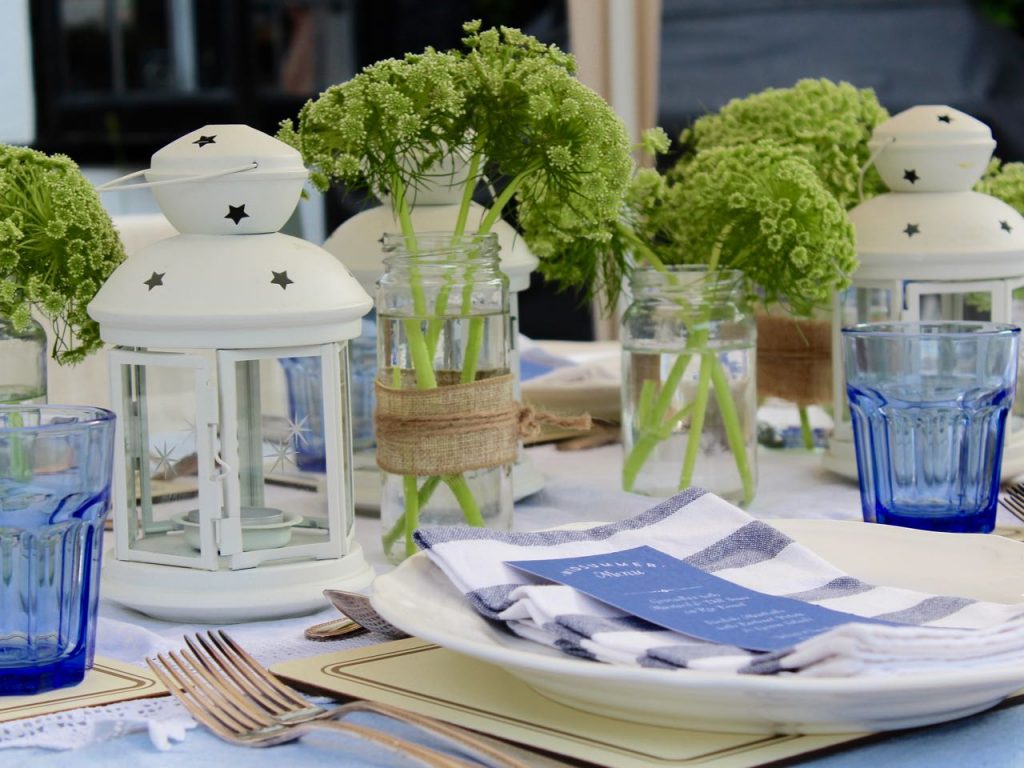 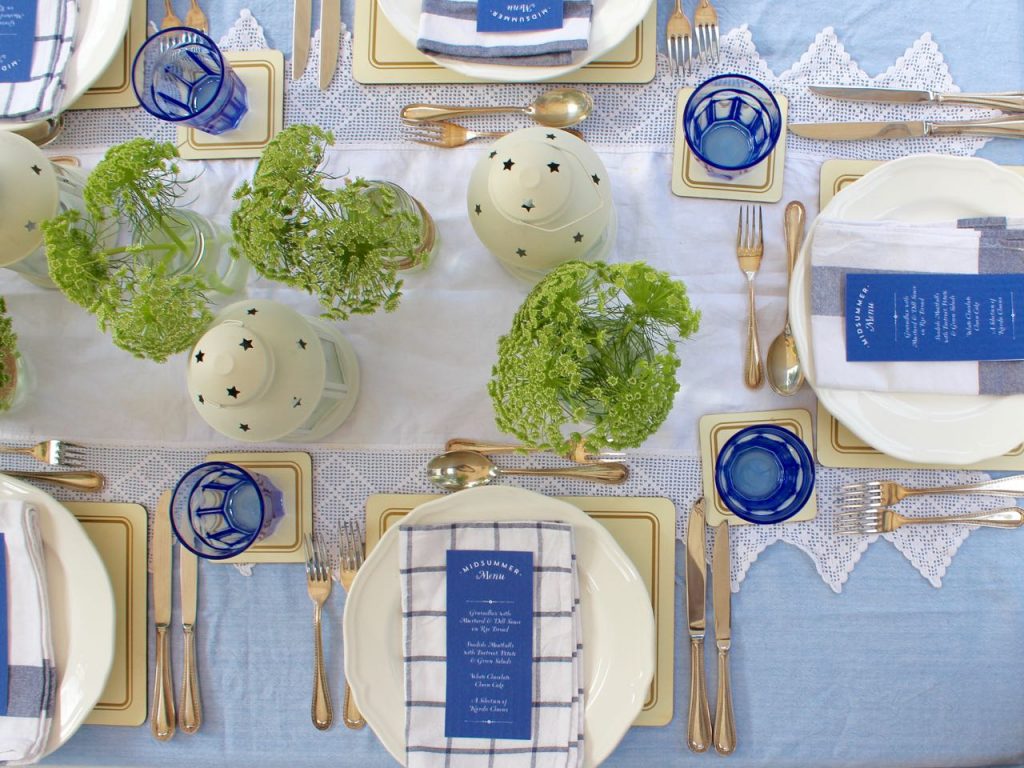 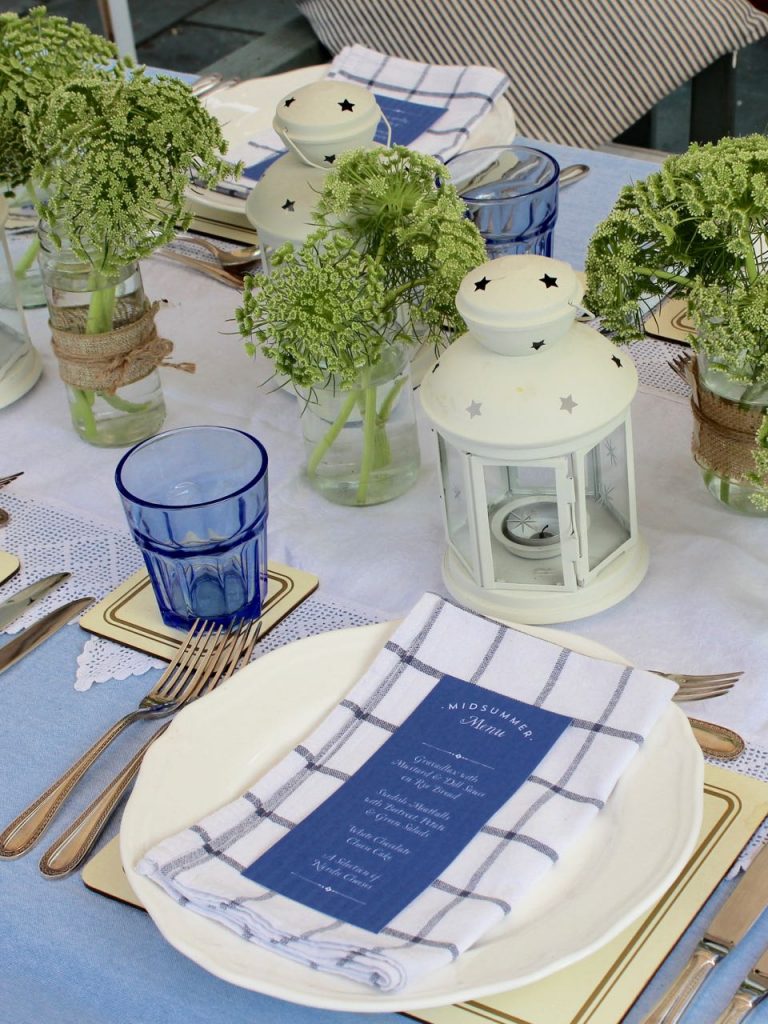 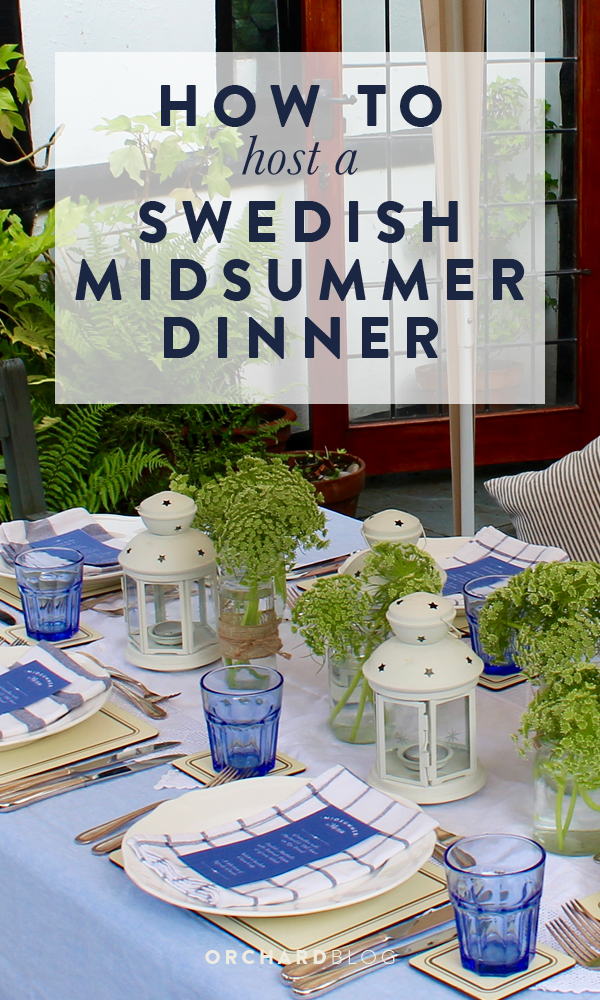