If you follow Rich’s Instagram you have probably realised his love of gardening.  For the first time in many years we have a garden to potter about in so we are going to start doing a few gardening updates on the blog to share our successes and failures. To start off lets have a look at the Roses we have planted in our new garden.

We love roses, especially old fashioned and vintage style roses. Four out of the five roses we have chosen are English Roses from David Austin Roses. David Austin is the breeder most often associated with this style of rose.  He has bred hundreds of varieties dating all the way back to the introduction of ‘Constance Spry’ in 1961.  As we have a relatively small garden we have opted for repeat flowering varieties to get the most from our plants and in general we like our roses to have strong scents. 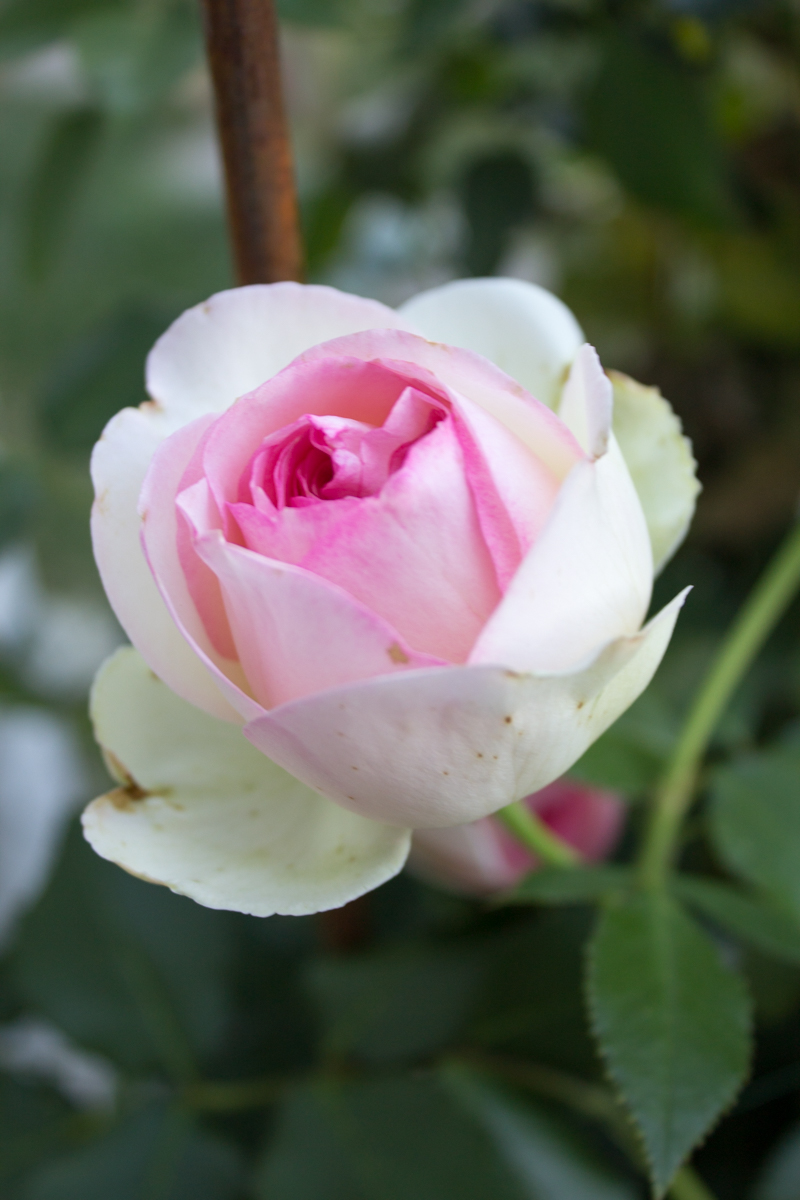 We fell in love this rose when we went to the Loire Valley last summer, when we were thinking about roses for our garden we knew this was a must. Developed by the French breeders Meilland International, we found it everywhere in France but a bit trickier to find in the UK where it is sometimes sold as Eden ’88.

It is a modern climbing rose with big old fashioned flowers.  The buds are cream on the outside and pink on the inside, as the flowers open the pink gently fades to a very pale pink.. They are big flowers that sometimes droop under their own weight. It needs a hot and sunny position to get the most of this rose. We are growing this rose in a container with a support against a south facing wall, so far it is going very well but the flowers got a bit bruised by the recent rains.   The only downside of this variety is it has almost no fragrance but the gorgeous flowers really make up for that. 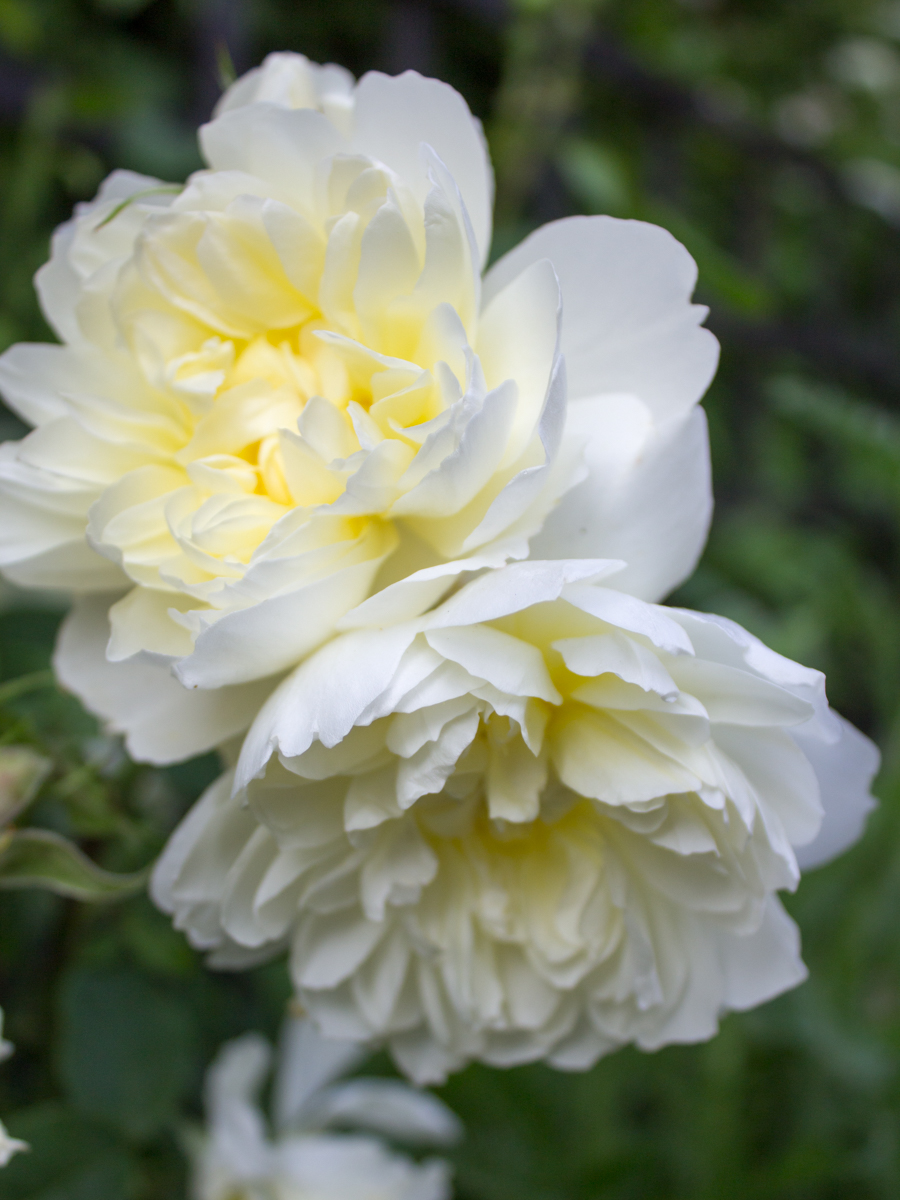 Our garden’s colour theme is mostly soft blues, purples and pinks but as a counterpoint we are using pale yellow flowers, we therefore wanted a pale yellow rose to continue this theme.  We chose David Austin’s 2016 introduction ‘Imogen’ to do this job.

Imogen has very pretty frilly flowers in a lemon yellow that fade to an almost cream colour. It has a lovely fresh scent that David Ausin suggests has hints of apple (we aren’t going to disagree).  It is a shrub rose that we have planted this in a mixed border and it is working very well.  This hasn’t flowered as much as the other roses in the garden but this is probably down to the poor soil where it is located, we have been feeding diligently and another flush of flowers are on the way 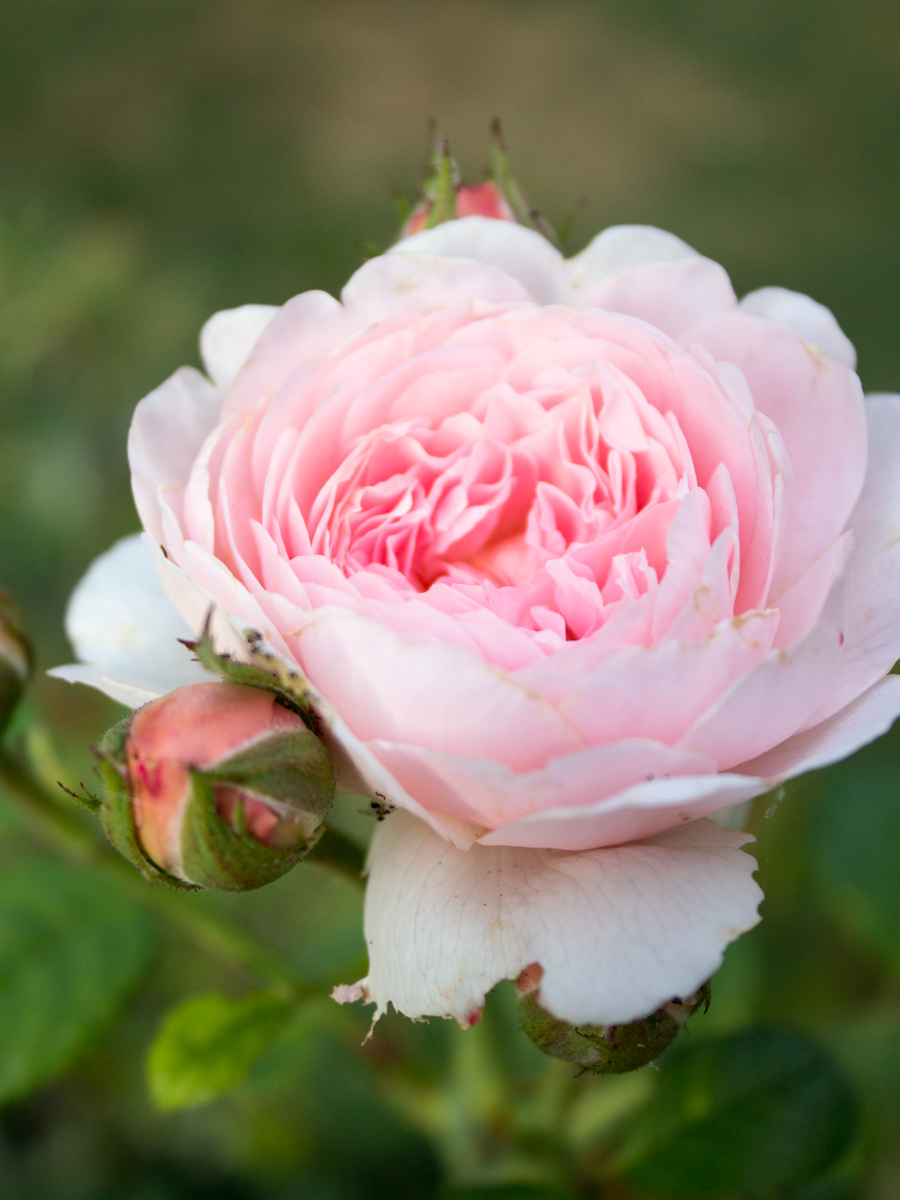 We are prone to buying roses because we like their name, which at guess is why they are named so! Our love of Scandinavia has behind this buying choice. David Austin’s Queen of Sweden was named in honour of the 350th anniversary of a treaty of friendship between Great Britain and Sweden.

Queen of Sweden has lovely cupped flowers in an apricot pink colour that fade to soft dusty pink. It has an upright growing habitat which makes it an excellent rose for cutting for arrangements in the house. It has a very light myrrh scent. Queen of Sweden is definitely the most romantic rose in our collection. 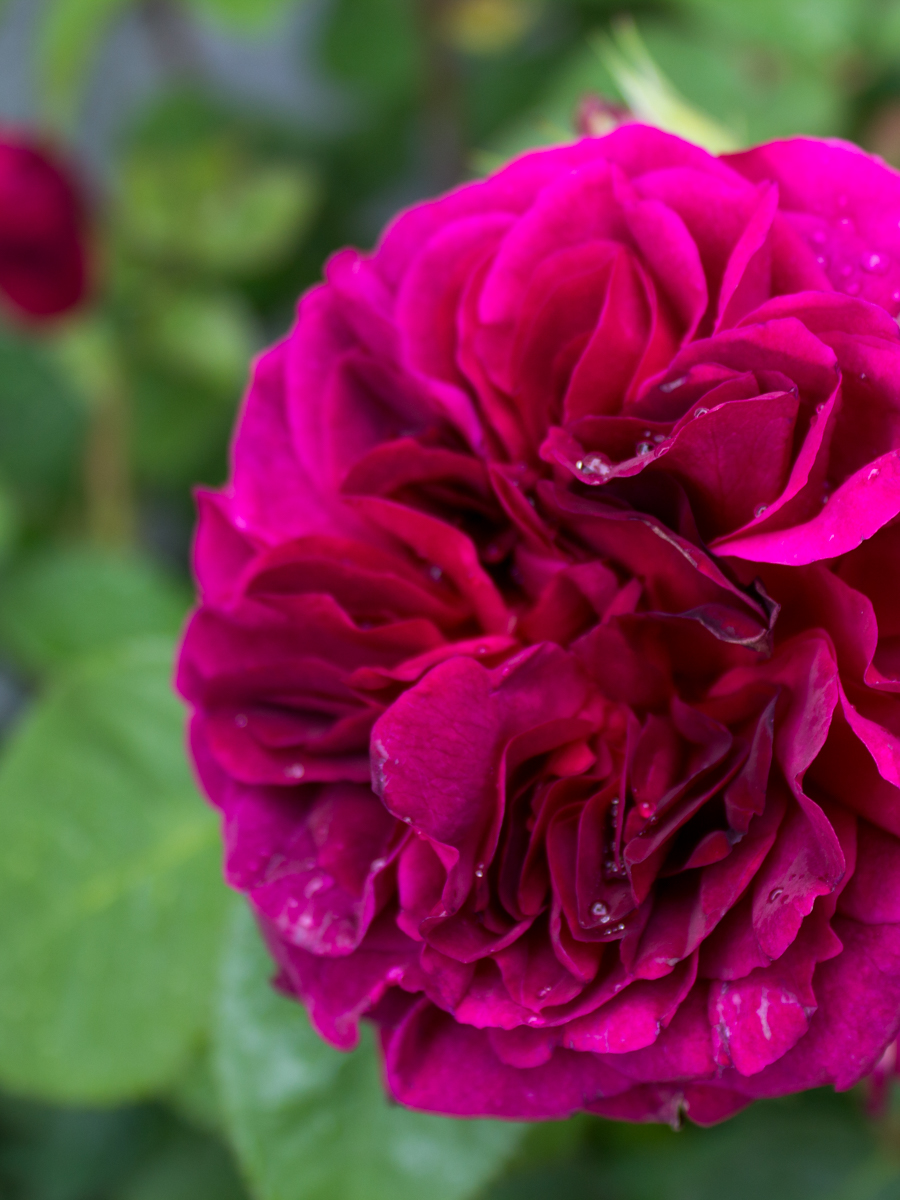 We wanted a darker rose to add to our collection and a bit of research led us to choosing ‘Munstead Wood’.  Another of David Austin’s English old rose hybrids, this rose is named after Gertrude Jekyll’s Surrey home.

This rose has been described as sultry and intense. It has burgundy red colour, halfway between red and purple. The flowers are large and cupped that become shallower over time.  Out of all our roses this has the headiest scent, it really hits you when we are out in the garden first thing in there morning. The scent is describe as having notes of blackberry, blueberry and damson. 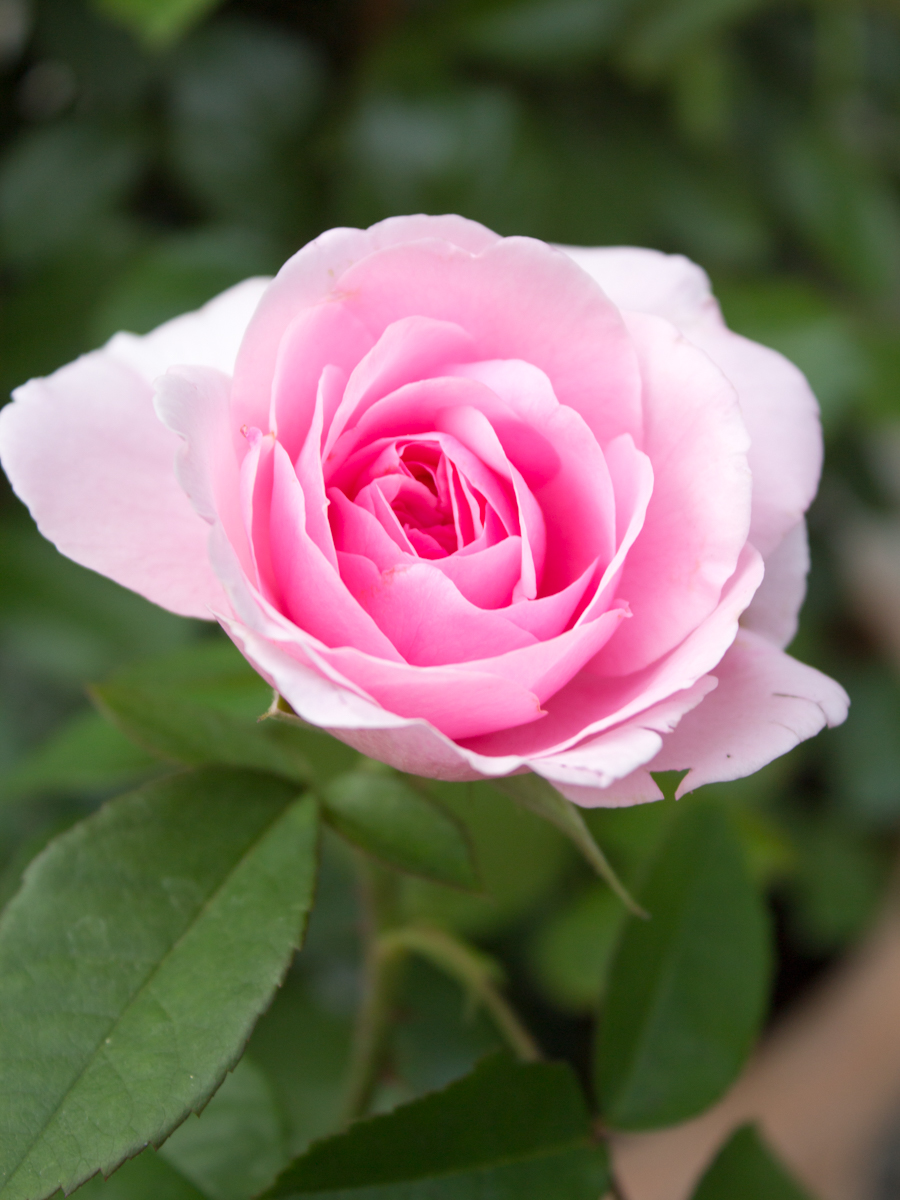 Scent is important to us when choosing roses which is why we settled on ‘Gertrude Jekyll’ one of David Austin’s best selling varieties.  Names in honour of one of the most influential gardeners of the 20th century (and one of Rich’s gardening heroes!) this is a great all round rose that can be grown as a shrub or as a short climber.

Gertrude Jekyll has small dark pink buds that open into big mid pink rosettes with a very pretty spiral of petals. The scent is very strong and described as the quintessential rose perfume.  To make the most of the fragrance we have planted this near to our back door.

Adding to our collection 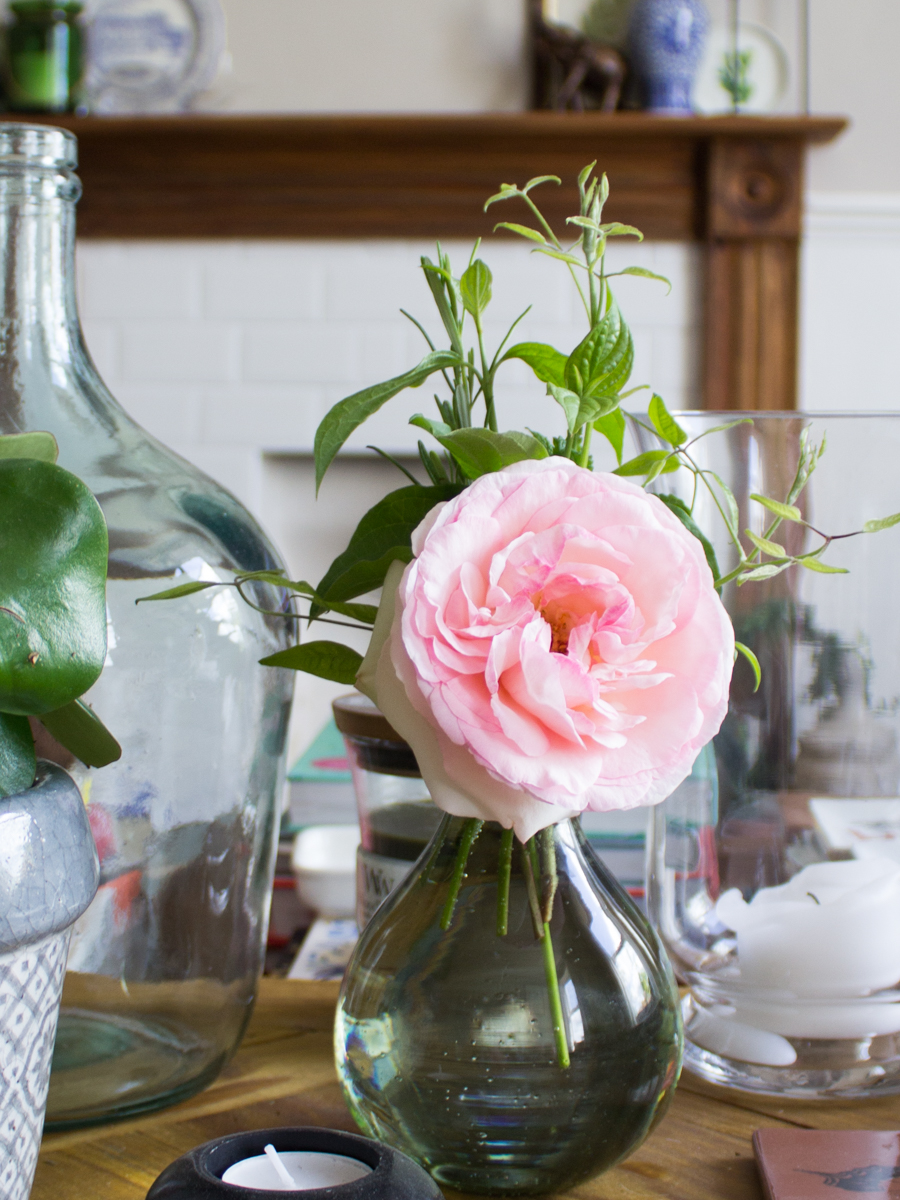 We have very quickly become ‘Roseaholics’ and we are sure to be adding to our collection as the garden develops. We have our eye on ‘Winchester Cathedral’ a honey and almond scented white rose, and ‘Surrey’ a ground cover rose with pink frilly flowers. We are also on the hunt for the perfect rambling rose, and there will no doubt be even more added to our collection! Do you have any recommendations please let us know in the comments.